Over a decade ago, screenwriter Atul Kulkarni adapted Robert Zemeckis’ 1994 film Forrest Gump — to fit the Indian landscape. Laal Singh Chaddha, the official Bollywood remake, released this month after years in the making, and actor Aamir Khan believes it was Kulkarni’s words that prompted him to accept the role.

“It was Atul’s narration,” Khan tells me when asked why he chose to star in the movie. “Until then, I could never imagine that Forrest Gump could be adapted into an Indian film.” The actor had watched Forrest Gump when it was first released 28 years ago, and instantly loved it.

Kulkarni’s script took Tom Hanks’ iconic movie, which Khan describes as “so deeply rooted in American culture,” and translated it to an Indian context. Before the script came to fruition, Khan says it was difficult to picture a Bollywood rendition of Forrest Gump working at all. But when he finished reading Kulkarni’s words, he says, he knew the film was calling to him.

“I suddenly started seeing the film in front of my eyes. I said [to Atul] ‘I really need to do this film,'” Khan says. “He did an amazing job of making this American film so Indian.”

The veteran Bollywood actor has a career spanning over 30 years and has starred in some of contemporary Bollywood’s most acclaimed — and lucrative — projects. Khan has been described by Forbes and Newsweek as the “world’s biggest movie star” and “the most bankable movie star in the world,” respectively, garnering a level of success perhaps fuelled his overwhelmingly deliberate and well thought-out film choices. For Khan to embrace an ambitious Forrest Gump adaptation is a testament to his faith in the script for the film.

What followed, once Kulkarni had finalized the writing, was an exceptionally long journey to complete the movie. This included several roadblocks: the eight years it took to secure the rights to the original, and later, the time spent waiting while the COVID-19 pandemic halted production, like most TV and film projects around the world. 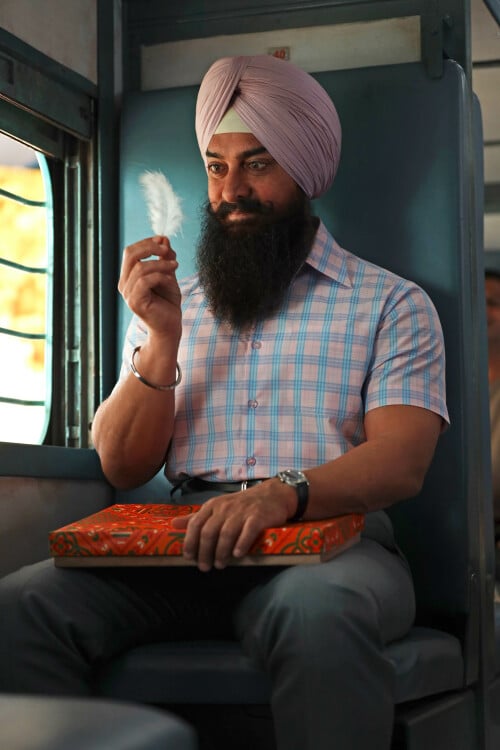 The iconic white feather made an appearance.
Credit: Paramount Pictures.

Amid these delays, Khan lived as Laal for about 10 years. When asked about the character, Khan speaks to his “amazing purity of heart” and innocence. He says Laal’s childlike wonder and kindness can be “disarming,” but this is, in fact, his strength.

Khan says the biggest challenge in making this adaptation was that of the screenwriter’s.

“I think [Atul], having written such a beautiful adaptation, made it so much easier for all of us to translate it, so we were basically, in a sense, following what he written. And that’s all we had to do.”

The film was shot at over a hundred different locations across India, which served as a backdrop to the iconic running scenes derived from the original film. Khan’s character, Laal, runs through some of the country’s biggest historical events and encounters pieces of politics and culture that have defined modern India. Meanwhile, the movie has been the site of controversy since its release, with calls to boycott Laal Singh Chaddha over Khan’s criticisms of growing religious intolerance in India.

This timeline of sociopolitical events that Laal runs through within the film, Khan says, is a quiet retelling of the nation and recent events in society.

While the film is “true to the spirit” of Forrest Gump, Khan believes that its renewed appeal lies in its portrayal of India.

“I’m hoping that when you watch the film, if you’ve seen Forrest Gump, that you would feel it’s something that is very true to its spirit, and that it evokes the same emotions. But what you also get to see is India: its culture, its people, its terrain, and the same story set in a totally new environment.”

Xiaomi's shuffling humanoid robot is here to cheer you up