Today, billions of tons of these nodules cover wide swaths of the ocean floor, several miles below the surface.


A nodule field in the Clarion-Clipperton Zone.GEOMAR


One of the largest areas is the Clarion-Clipperton Zone, which covers 1.7 million miles of the Pacific seabed and holds vast fields of nodules. 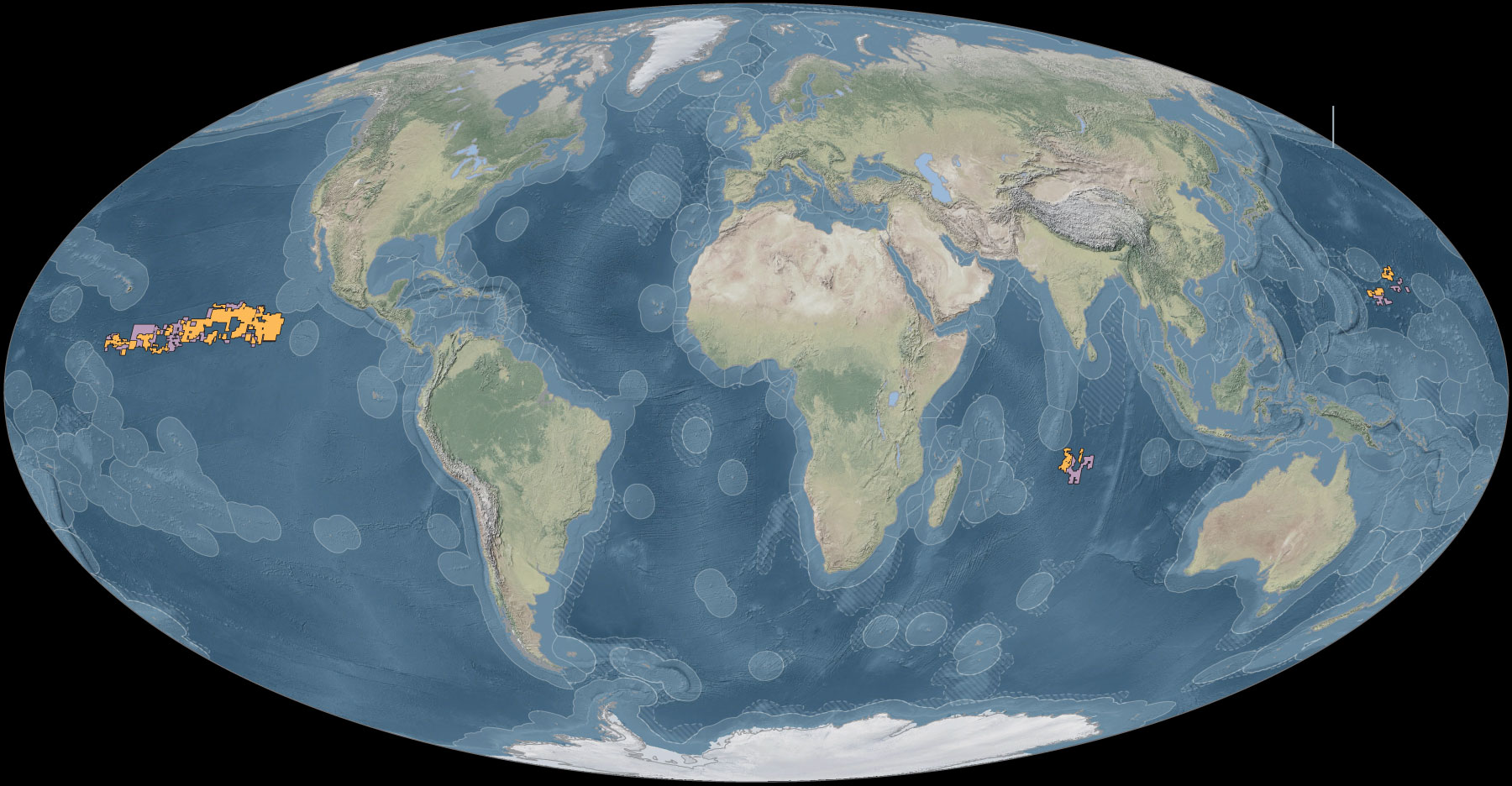 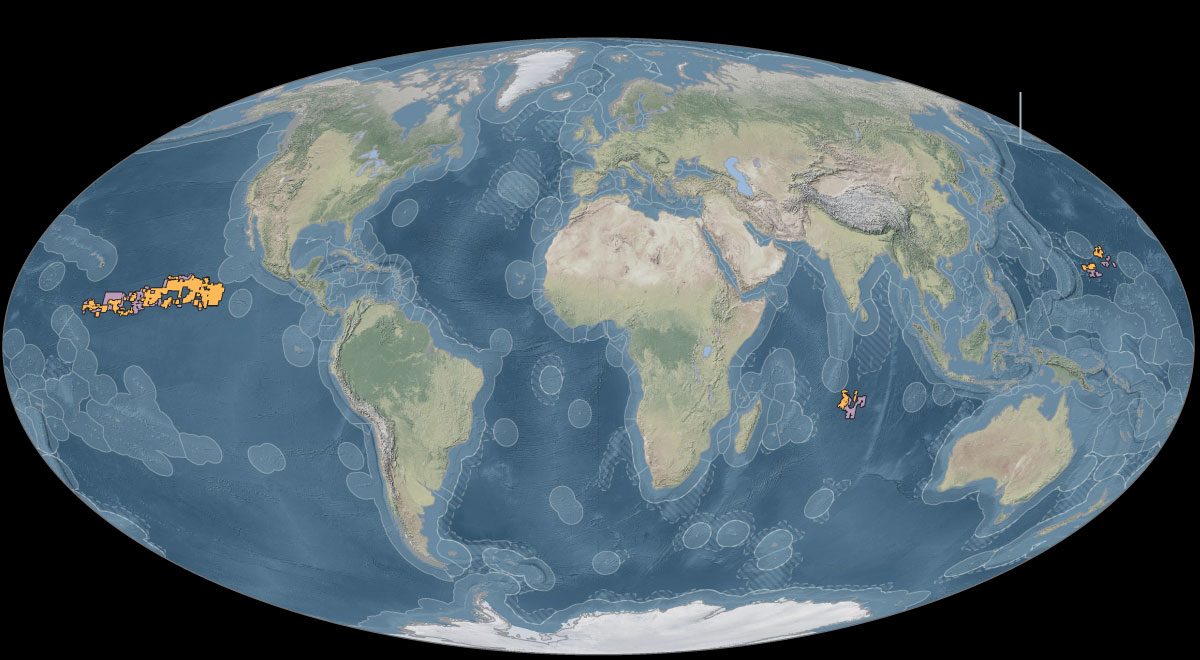 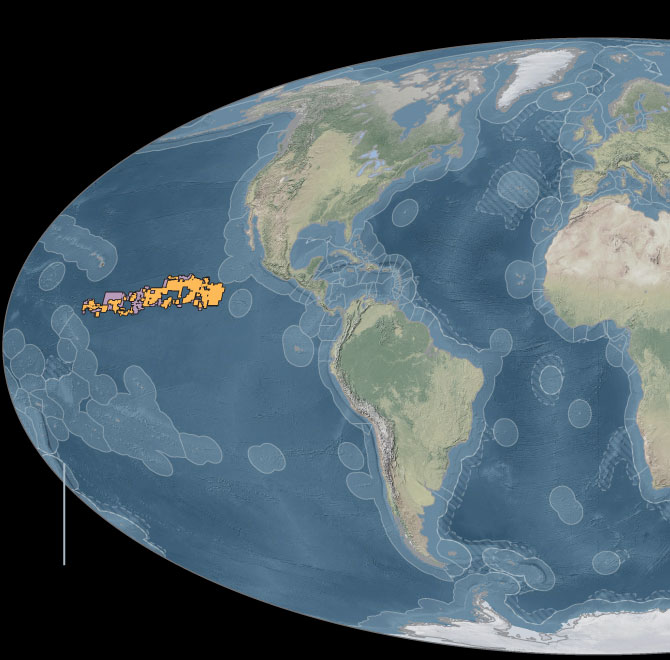 
Life Among the Nodules


Polymetallic nodules are an anchor for a fragile and slow-growing ecosystem that includes species found nowhere else on Earth.


For creatures that cannot easily swim, nodules are islands to settle on and build a life. The muddy seafloor is too soft to be a home for them.


Glass sponges are the most common sponges in the Clarion-Clipperton Zone. They can live for thousands of years and provide important habitats for other creatures. They are living archives, recording the ancient climate of the deep sea in their skeletons, like tree rings.


Several glass sponges grow on top of one another, including a brown vase-like sponge in the genus Oopsacas and a white sponge in the family Euplectellidae.GEOMAR


Other species float and swim over the nodule fields.


An unidentified species of jellyfish.GEOMAR


This rippling squidworm — which is a worm, not a squid — hovers over the nodules, settling only to feed.


Two carnivorous sponges. On the left, a species in the genus Cladorhiza. On the right, a ping-pong tree sponge in the genus Chondrocladia, which uses hooks to capture its prey.Craig Smith, DeepCCZ Project


Some creatures even live in crevices in the nodules, such as this pearlescent worm.


Many of the species discovered so far in the Clarion-Clipperton Zone are found only on the nodules themselves. If the nodules go, they will, too.


Mining companies describe the nodules as a “battery in a rock” because they contain the essential metals for a clean energy economy that is dependent on batteries and electric vehicles.


The Clarion-Clipperton Zone lies in international waters and is overseen by the International Seabed Authority. Large areas have been set aside for different countries to mine, but commercial mining has not yet begun.


Two deep-sea species of sea cucumber, one sitting and one swimming.GEOMAR


The actual mining is straightforward: Dredge or vacuum the nodules up from the muddy sediment. But removing nodules destroys everything that lives on them.


Scientists collecting a sample of the black coral Antipatharia.GEOMAR


Mining the seafloor also stirs up gritty plumes that can travel as far as five miles. These sediment clouds can bury fields of nodules, choke the filters of sponges and anemones living outside the mining zone and obscure bioluminescence that squid and fish use to hunt and mate.


A cloud of fine sediment billowing from the seafloor, caused by a remotely operated vehicle. A mining head — many times larger and faster — could make a larger cloud. (Engineers are looking for ways to limit the size of the plumes.)Craig Smith, DeepCCZ Project


Without nodules, many of these species will not be able to resettle the disturbed seafloor. And with very little natural water movement this deep, dredging scars can persist for decades.


A Dumbo octopus floats over a gouge in the seafloor.GEOMAR


After eight years, the edges and grooves of a Belgian dredging scar are still sharp.


The Belgian area of the Clarion-Clipperton Zone.GEOMAR


After 37 years, a French dredging scar is softened but still bare.


The French section of the Clarion-Clipperton Zone.GEOMAR


The Clarion-Clipperton Zone is currently divided into 16 exploration areas controlled by different countries, including areas reserved for some of the world’s less developed nations. Other exploration areas have been designated in the Atlantic Ocean and the western Pacific.


Researchers lower a vehicle to study the seafloor.GEOMAR


The metals found in nodules can be mined from land, but some of those mines are riddled with human-rights abuses. Terrestrial mining also carries a heavy environmental cost: clearing forests, contaminating air, polluting water and threatening biodiversity.


Deep-sea mining of the world’s largest habitat — and the little-known species that inhabit it — may begin in earnest as early as 2024.

Be Your Best When You Feel Bad