For those who haven’t, welcome! You’re about to strike a match on the unnecessary nightmare that is a remake of a critically acclaimed and terrifying film about twin brothers who fear a vicious imposter has invaded their home.

Written and directed by Veronika Franz and Severin Fiala, the original film is a triumph of understated slow burn terror, then unnerving body horror that lingers with you long after the final unsettling moments, and leaving you uncomfortably aware of the capabilities of humans to inflict pain on one another.

Goodnight Mommy follows twin brothers Elias and Lukas (played by Elias and Lukas Schwarz), whose mother (Susanne Wuest) returns in facial bandages post-surgery to their modernist country house to recover. As she begins showing erratic and abusive behaviour, the boys suspect the person underneath the bandages might not be their mother at all.

With an adapted screenplay from Kyle Warren, Brand New Cherry Flavor director Matt Sobel is behind the helm of the 2022 remake for Prime Video, which indicates a certain level of squirm factor afoot. Cameron and Nicholas Crovetti (Nicole Kidman’s sons on Big Little Lies) take on the roles of Elias and Lukas, whose father drops them off at the American country house of their mother, played by another Australian star, horror remake aficionado Naomi Watts. (See also: The Ring and Funny Games. Or you know, don’t.)

In a nutshell, the remake dilutes the most shocking, violent elements of the original, in a way that reduces the film to a rather stale few hours of emotional and physical torment that underuses Watts’ talent. Then comes lukewarm home truths that don’t land in any way as expertly as the chilling 2014 film.

So, though Sobel borrows a few character-following camera techniques from Franz and Fiala’s film, how is the English language remake of Goodnight Mommy really different from the original, apart from subbing out of Brahms’s “Cradle Song” for Jimmie Davis and Charles Mitchell’s “You Are My Sunshine” as a creepy lullaby motif?

If you’re not into spoilers, turn back now. If you’ve already started the fire, step this way.

Goodnight Mommy’s core mystery solved: Is she or isn’t she? 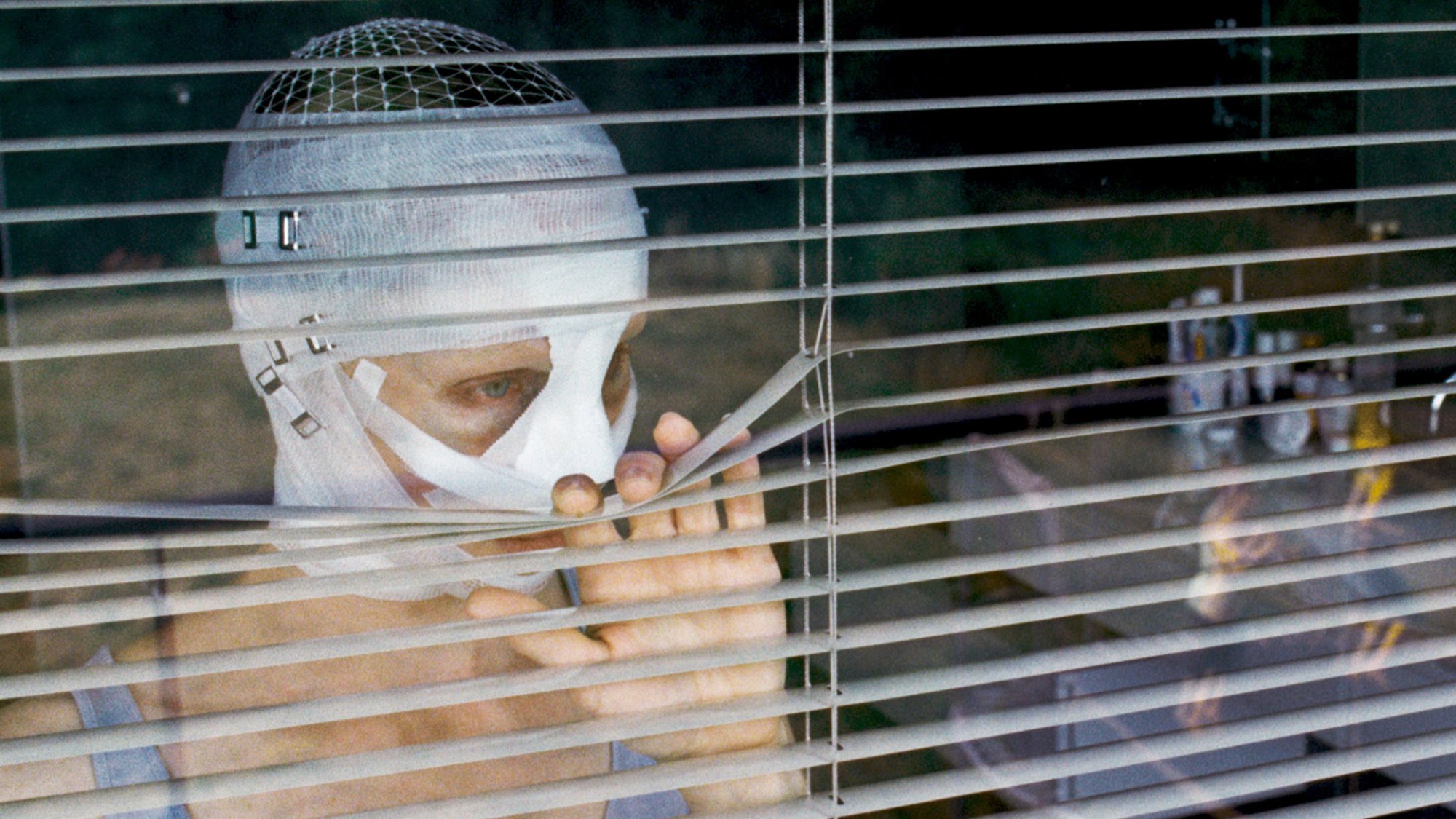 In the original, the identity of the mother is kept in question until the very end, keeping the audience as fearful of her presence as Lukas and Elias. Wuest’s unnervingly robotic movements stalking through the house, her menacing staring, her cruel treatment of the boys’ stray cat, and refusal to completely confirm her identity constantly make the audience question whether this person is in fact the boys’ mother, or even whether she’s completely human thanks to a surreal forest scene harks to Robert Eggers’ The Witch.

In both films, the prevalence of darkness and silence in the mother’s house makes narrative sense, as a strict rule set as necessary for her recovery. But the original uses this lack of sound and light to terrifying thematic effect, whereas it simply feels like a horror given in the remake. 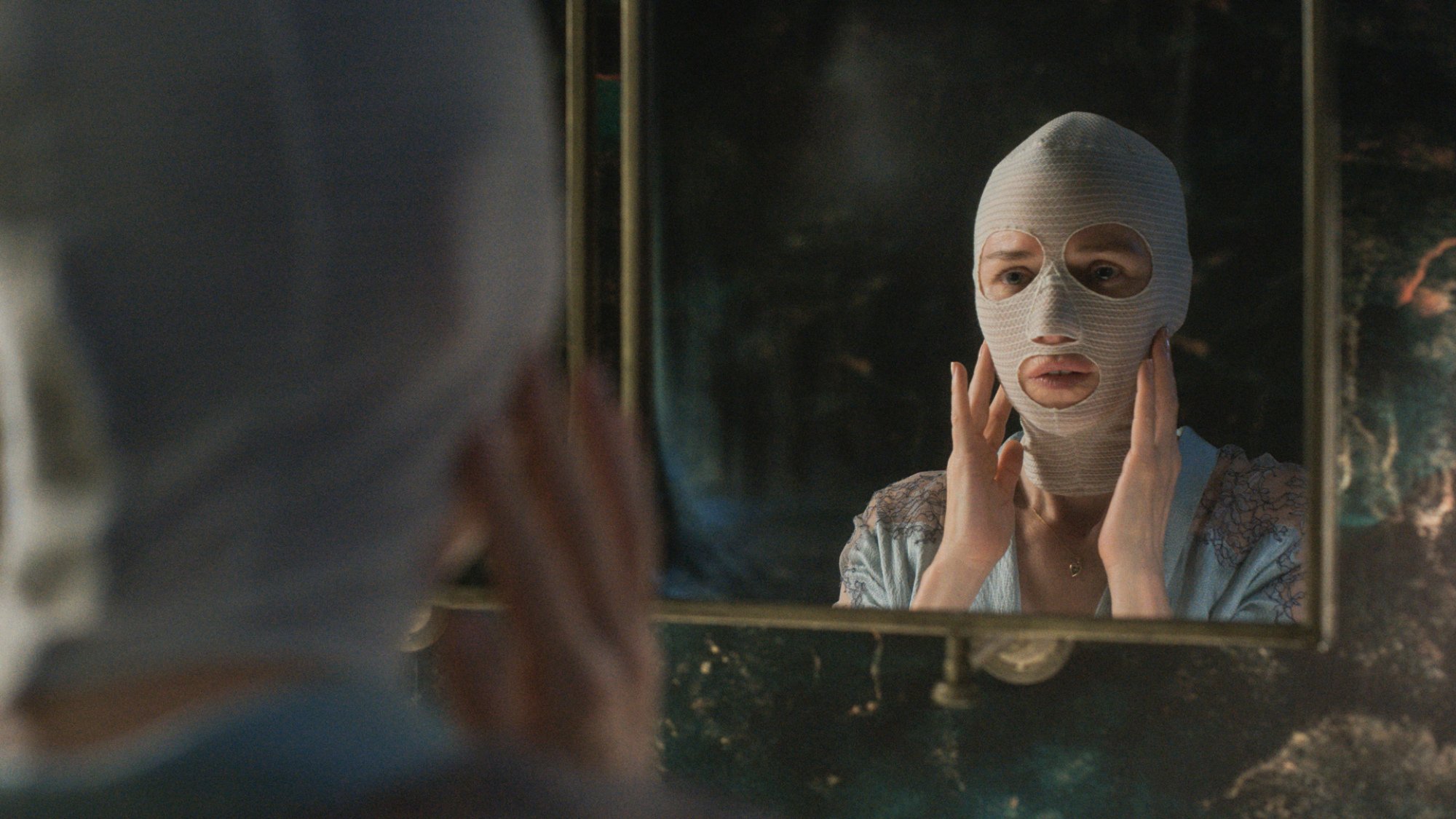 Watt’s version of the mother is much warmer and seemingly more human than the original character. She moves through the house like a regular person, at first speaks kindly to the boys, and clears up any feelings of doubt immediately. This makes it more difficult for the audience to feel the creeping dread of the twins’ suspicions. “It’s still me under here,” she declares when the boys first arrive. “I hate that you have to see me like this. But there’s nothing to be afraid of.”

The boys gather evidence in both films, but the original offers up major clues to indicate this actually might not be their mother: a picture of her with an identical woman, her insistence on wearing contacts we never see confirmed, and a drawn-on mole revealed during interrogation. The remake answers all of these questions or doesn’t include these clues at all. Added are multiple scenes showing the boys’ father, meaning it becomes clear Watts is indeed their mother. This level of consistent confirmation of identity reduces the level of threat to Elias and Lukas, and foregrounds the final reveal early in the piece, slowing the whole thing down.

Elias is brought front and centre

In the new film, one of the twins is placed at the centre of the story, while the original film balanced the three core characters. Sobel pays the most attention to Elias in the film, which risks revealing the story’s twist too early for those who haven’t seen the original. Luckily, Cameron and Nicholas Crovetti bring compelling individual performances. Cameron, in particular, is required to do most of the heavy emotional lifting as Elias, and actually brings more nuance and emotion to the character than the dead-eyed terror of the original. But then again, he’s asked to do less violent acts as the character, so it checks out.

It’s the biggest challenge for the actors and directors in both films, making both Lukas and Elias make sense in every scene until the reveal without making the audience aware that their mother is only interacting with Elias. And honestly, both the remake and original do an exceptional job of making this work with savvy blocking and well-measured dialogue.

Lukas’ fate is no longer a mystery 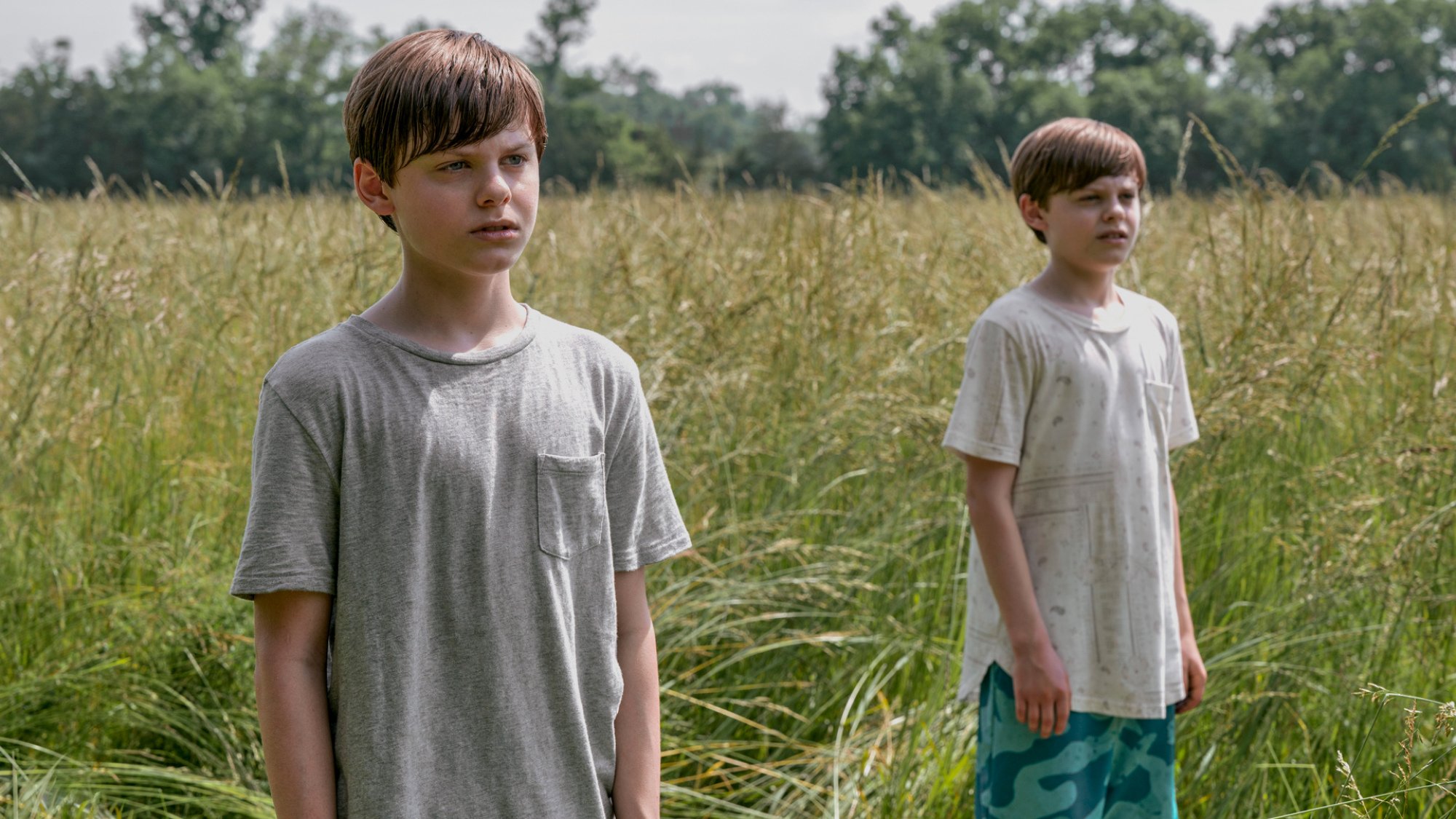 Cameron and Nicholas Crovetti in the 2022 remake.
Credit: Amazon Studios

One of the most perplexing questions of the original is what exactly happened to Lukas. In the original it’s ambiguous, as Lukas disappears into a dark tunnel in the woods amid inexplicable and sinister sounds at the start. In the next scene, we see Elias floating on a lake, calling out for Lukas, and we see nothing but bubbles from the depths. Whether this means Lukas drowned, and the tunnel scene was representative of his death is left up to the viewer.

In the remake, there is no question left unsolved as to how Lukas died. It’s very clearly revealed. Watts’ character takes Elias to the forbidden barn and explains that he accidentally shot his brother while they were playing with a gun. In both instances, it appears that Elias has completely blocked Lukas’ death from his memory, and measures the truth of his mother’s identity on whether or not she plays along with his fantasy of keeping Lukas alive.

Sobel cuts the graphic torture from the original 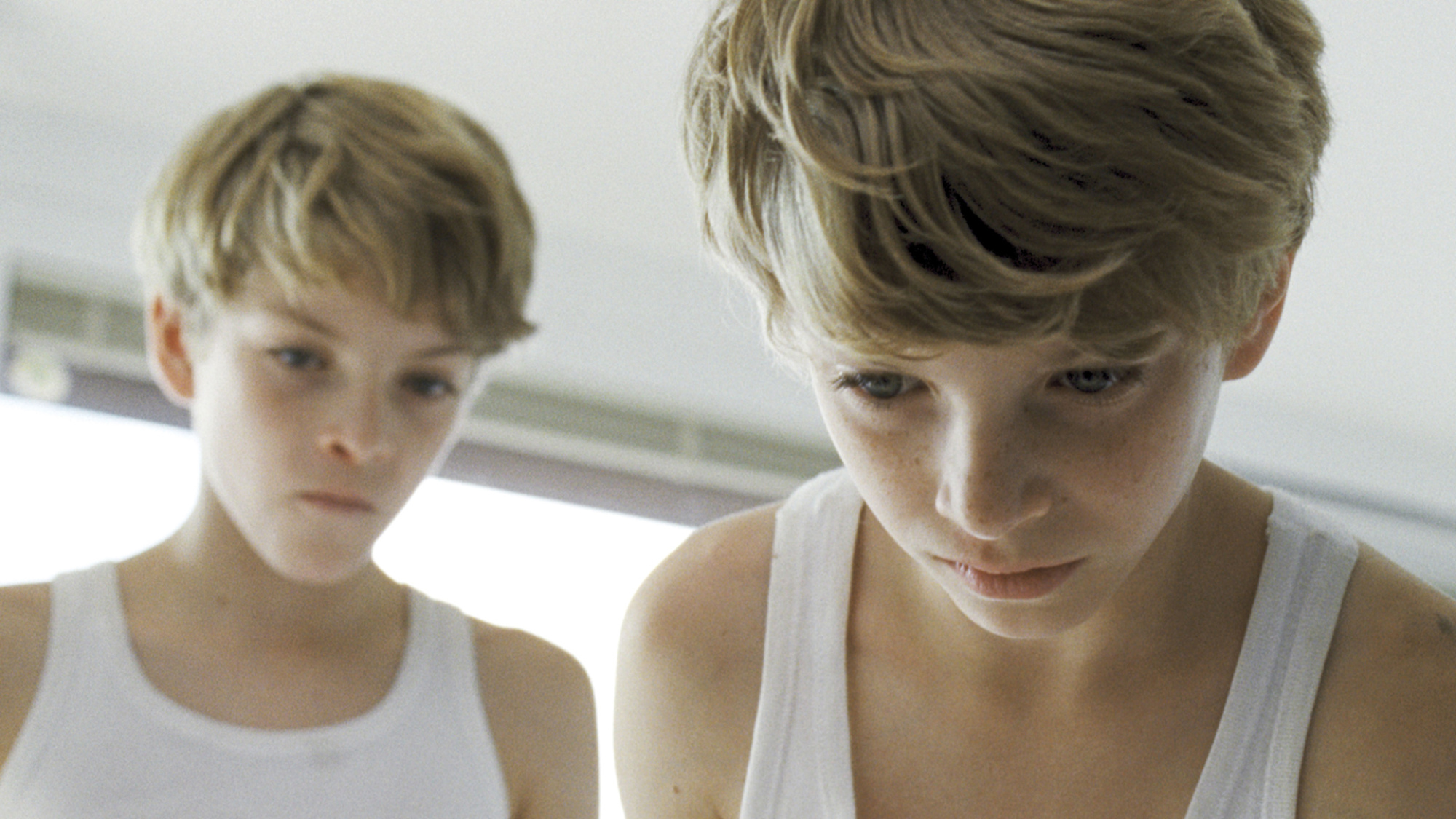 Wow, Watts’ character gets a much better deal than Wuest’s.

In both the original and the remake, Elias shockingly restrains his mother in the film’s third act to interrogate her about her identity. One of the chillingly defining elements of the original film is the ensuing scenes of torture, demonstrating the truly insidious capabilities of humans, even children. Wuest’s character is put through horrific torture, before being burned alive in a fire intentionally started by Elias. They’re truly distressing scenes with exceptional acting by Wuest.

In the remake, Elias’ limits his torture methods, and he manages to separate himself from Lukas long enough to connect with his mother in an emotional, present moment for both of them. Wuest’s character never gets this moment. Unfortunately Watts’ mother also meets death by her son’s hand. But in the remake it seems accidental, which makes for a (slightly) less harrowing ending.

Is the Goodnight Mommy remake better than the original?

Ultimately, Sobel’s remake of Goodnight Mommy ditches the original’s shocking scenes of violence and forces narrative opportunities to fully answer questions left unanswered by Franz and Fiala. Surprisingly, Fiala seems to be fine with this, saying in a press statement: “I think they solved some problems in their script that we couldn’t solve in ours, so that was very interesting to see.”

However, the result is the antithesis of what made the Austrian version so shockingly memorable: a disturbing, private examination of grief and trauma that coldly demonstrates what a child is capable of, one that leaves the audience still wondering whether it was mommy they were indeed saying goodnight to. The slippery surrealness was a major part of what made the original so satisfyingly sinister. Unfortunately, the remake’s quest to fill in the gaps weakens the sheer terror of a lauded international horror gem. We never needed to know all the answers.

Goodnight Mommy (2014) is available for rent or purchase on Prime Video. (opens in a new tab)

4 Ways You Are Being Influenced By Spiritual Beings

Rihanna to Headline the Next Super Bowl Halftime Show

Starseed…Discover the 20 Signs to Determine if You are One!