In a pair of eye-opening new space photos, the largest planet in our solar system glows like never before, with its hazy surface, and its northern and southern auroras, rendered seemingly incandescent by the sun’s glaring rays.

The James Webb Space Telescope is equipped with a system called the Near-Infrared Camera (NIRCam), which doesn’t take photos like your smartphone does. By taking in light from outside the spectrum visible to the human eye, it captures previously invisible realities — presenting Jupiter as a planet teeming with ethereal phenomena. 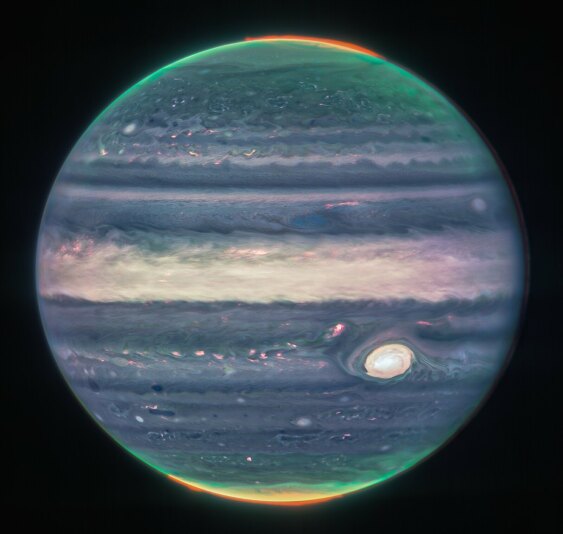 To convert the infrared data into useable, and gorgeous, images, NASA received help from citizen scientist Judy Schmidt who pieced together the above photo from three infrared data layers. In the above image, the red layer comes from Webb’s F360M layer, which is used for planets; the yellow-green layer is Webb’s F212N filter, used for molecular hydrogen; and the cyan comes from the F150W2 filter (you can read more about these filters here). Schmidt also corrected the misalignment of the images caused by Jupiter’s rotation.

A second image by NASA, Schmidt, and citizen scientist Ricardo Hueso is drawn from just two of the NIRCam filters, and it gives a wider view of this glowing, infrared version of Jupiter. We see the enormous planet set against distant galaxies, and can make out its faint and rarely photographed rings, along with two of its moons: Amalthea and Adrastea. Astronomer Imke de Pater, who along with astronomer Thierry Fouchet led the Webb Jupiter observations, told NASA: “We hadn’t really expected it to be this good, to be honest,” and added, “It’s really remarkable that we can see details on Jupiter together with its rings, tiny satellites, and even galaxies in one image.”

‘Self-Boosting’ Vaccines Could Be Immunizations of the Future

Print your own makeup with the Mink Makeup Printer