Along with a rising number of space missions by government agencies and private industry, comes a fresh set of problems for Earthlings: potentially dangerous space junk.

A recent study published in the scientific journal Nature Astronomy concluded “that current practices have on order a 10 percent chance of one or more casualties over a decade.” In other words, according to researchers from the University of Victoria and the University of British Columbia, there’s roughly a one-in-ten chance that the next decade will witness falling space junk kill someone.

But that’s just a small part of the problem the study outlines.

Orbiting space debris is an unfortunate by-product of our desire to explore and document space. According to 2021 figures from NASA and the Department of Defense’s Space Surveillance Data, the agencies were actively tracking more than 27,000 pieces of space debris (most of which is larger than a softball) that casually orbit the planet. While the floating space junk is certainly a problem, not all that the objects that went up must come down, and, in fact, a good portion of debris simply burns up in the atmosphere.

But sometimes those objects, particularly large ones like spent rocket boosters, succumb to gravity and fall back down to Earth, to be dealt with, once again, by their human makers. Typically, people don’t die or even get injured by this phenomenon — much of the falling debris crashes into the ocean. People do, however, have to deal with all the unwanted junk.

They also have to deal with the unsettling feeling of knowing that large rocket debris can just fall from the sky, and, as the new study details, that it might affect people in certain parts of the world more than others.

A rocket will crash into the moon. It’ll leave way more than a scar.

Dr. Alice Gorman, an associate professor at Flinders University in Adelaide, Australia, teaches archaeology and cultural heritage management, and is a leader in the field of space archaeology. Gorman explained to Mashable via e-mail that the presence of space debris has always caused concern among the general public.

“About 90 tons of old spacecraft reenter earth’s atmosphere every year, and most of these are rocket bodies abandoned in earth orbit. On average, objects weighing more than 5,000 kilograms [over 11,000 pounds] reenter every 215 days,” Gorman explained. “Whenever there’s a high-profile re-entry event, it’s clear there’s a great deal of public concern about being hit by falling debris. Despite all the assurances that the debris will fall over the ocean or unpopulated areas, people are still anxious.”

The space junk burden of the Global South

On August 2, a sheep farmer in rural Australia discovered the last of multiple, large chunks of debris (strongly suspected to be from a previous SpaceX mission) that had plummeted from the sky some time between July 17 and 25. The event marked one of hundreds of annual reentry events that occur, but which normally don’t impact people residing on Earth.

This discovery came just a few weeks after the publication of the aforementioned study in Nature Astronomy. In it, the researchers called for action on what they call a growing problem of unregulated space junk and unnecessary, uncontrolled reentry of space objects — a problem which, much like everything else on our planet, has disproportionate effects on places and people who never consented to take on the risk.

The study tracked reported data on space launches and abandoned rocket bodies orbiting the planet, in order to calculate potential casualties from rocket body reentries. Among several alarming conclusions, the figures showed that the majority of falling space debris lands in countries around and below the equator, often referred to as the “global south.” Many of these countries, which make up the regions of Latin America, Asia, Africa, and Oceania, are not the ones launching satellites and rockets, let alone operating space programs of their own. 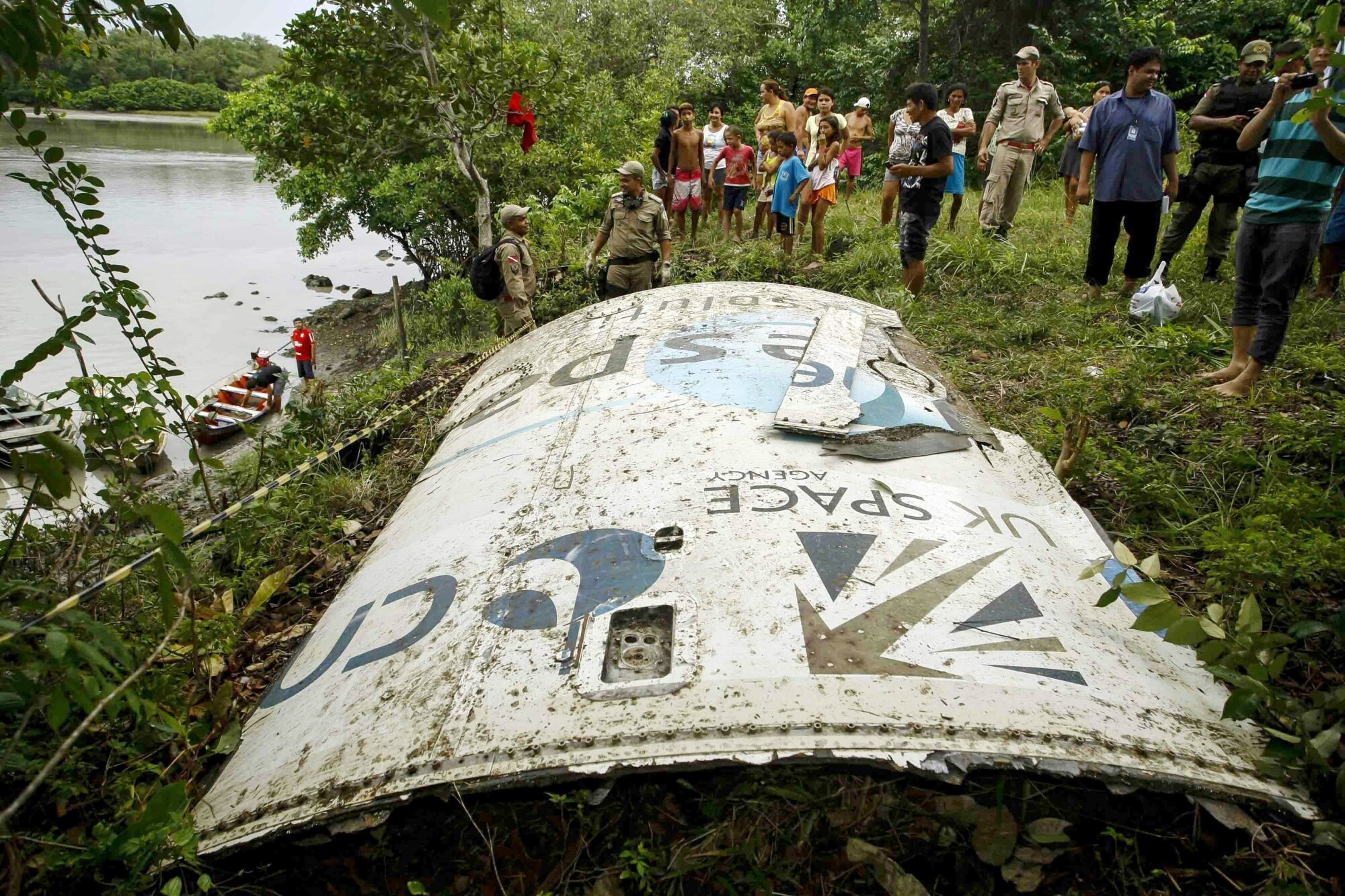 In 2014, residents of Salinopolis, Brazil discovered a piece of fallen space debris from a European spacecraft launched from the Kourou spaceport in French Guiana.
Credit: TARSO SARRAF / AFP via Getty Images

The research argues that governing bodies and companies are now choosing to let debris enter the atmosphere in uncontrolled ways rather than using advancing technology to control rocket body reentries, and that in doing so, “major launching states [are] exporting risk to the rest of the world.”

“It would only take one death by space junk to cause a serious change in public opinion.”

This poses an obvious safety risk to people on the ground. “When intact stages return to Earth, a substantial fraction of their mass survives the heat of atmospheric reentry as debris. Many of the surviving pieces are potentially lethal, posing serious risks on land, at sea, and to people in aeroplanes,” the study explains.

The reason for this disparity in impact is largely a product of simple science — many of the launches that lead to uncontrolled reentries are launched in synchrony to the Earth’s orbit and rotation, known as geosynchronous orbits. Falling debris is concentrated on this path, and weighted around equatorial regions. The study found that the latitudes of Jakarta, Indonesia, Dhaka, Bangladesh, Mexico City, Mexico, Bogotá, Colombia, and Lagos, Nigeria, are at least three times as likely to be hit with debris as those of Beijing, China, Moscow, Russia, and Washington, DC and New York in the U.S.

The study found that the latitudes of Jakarta, Indonesia, Dhaka, Bangladesh, Mexico City, Mexico, Bogotá, Colombia, and Lagos, Nigeria, are at least three times as likely to be hit with debris as those of Beijing, China, Moscow, Russia, and Washington, DC and New York in the U.S.

Even though it’s seemingly unintentional, this threat from above adds to stressors within countries that are already bearing the brunt (and associated anxiety) of the global climate crisis and other issues of environmental degradation like biodiversity loss, along with the broader issue of socio-economic inequality — burdens that were historically offloaded onto the global south by richer countries.

Many of these global south governments have previously called for climate reparations to offset the impact of climate change in particular. Climate activists frequently demand the decolonization of the climate crisis, calls for environmentalism that faults extractive capitalism for these problems, and centers indigenous communities.

It now appears space junk may be added to the list of offenses perpetrated against indigenous peoples and the global south.

In 1979, NASA’s Skylab space station, the country’s first orbital outpost, fell to Earth and scattered large pieces of debris around Australia and into the Indian Ocean. Space archaeologist Gorman described the public response as one largely full of panic, influenced by a lack of knowledge of where the space junk would eventually fall and a political climate that fostered a fear of aerial threats. It also brought up some of the earliest questions of space junk “littering” after the mid-century space exploration boom. A few years earlier, the Liability Convention of 1972 had declared that launching states had to pay compensation for any damage their objects’ debris caused. “Being paid compensation after the event would be a small consolation for someone killed or seriously injured,” Gorman said. “It would only take one death by space junk to cause a serious change in public opinion.” 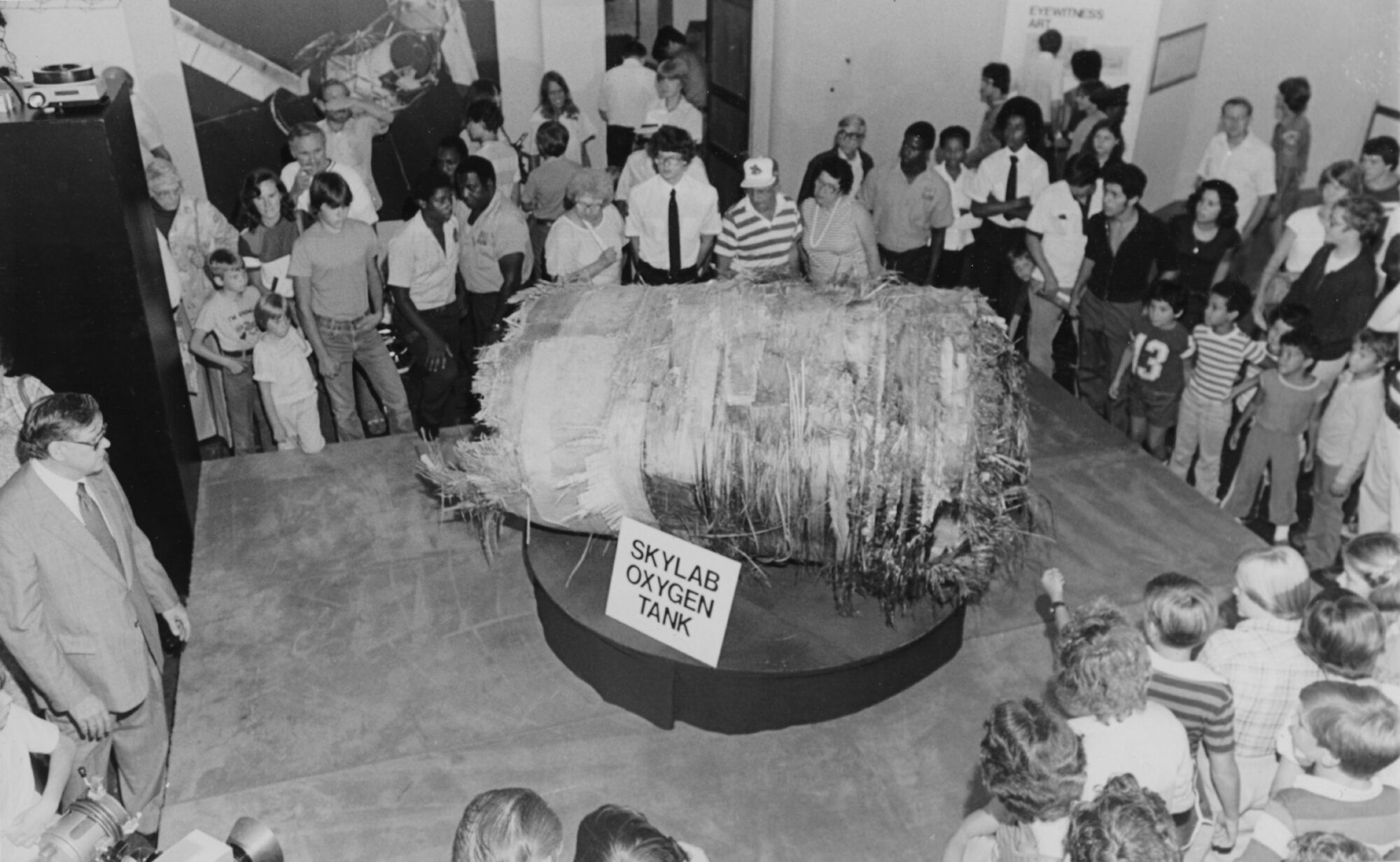 A collection of various similar treaties means the status of space debris isn’t entirely unregulated. The United Nations’ Outer Space Treaty, and the Convention on International Liability for Damage Caused by Space Objects, includes provisions for the ownership and responsibility of objects launched into space and their subsequent re-entry, but the protocols are fairly vague. As the study explains, other debris-centered guidance, like the 2010 UN Space Debris Mitigation Guidelines and the 2018 UN Guidelines for the Long-term Sustainability of Outer Space Activities, both recommend governments prevent “undue risk” to people on Earth, with no clear guidance as to how.

But as governing bodies move slowly, there’s growing conflict orbiting our planet’s atmospheric junkyard. In November 2021, the Russian government came under the ire of the global space community after destroying an orbiting rocket that shot out a great cloud of rocket fragments, threatening the safety of astronauts on the International Space Station. In response, professor Hugh Lewis designed a simulation of orbital debris that demonstrated the risks of clogged atmospheric paths. This highlighted a phenomenon called “Kessler Syndrome,” in which disastrous collisions pile up and become inevitable as a sort of domino effect if debris isn’t cleaned up.

So, with these future space forecasts in mind, who should be held responsible for the safety of communities in the global south and elsewhere, which are shouldering the literal impact of these space missions?

Some have demanded stronger mandates from international agencies to protect vulnerable communities from potential debris and clean up the atmosphere, like the recent issue brief on space traffic management by bipartisan think tank The Atlantic Council. Clean-up efforts have long been top of mind. In 2018, the International Space Station launched the RemoveDEBRIS satellite, which tested several methods for collecting space debris. In 2021, the Japan-based company Astroscale announced it was exploring commercial debris removal. Unsurprisingly, the United States lags woefully behind in taking care of its space junk.

“Some have even argued that we need a new human right — the right of freedom from threats from the skies.”

“Some have even argued that we need a new human right — the right of freedom from threats from the skies. People should be able to gaze up at the night sky in wonder, without worrying that a blazing rocket body will rain destruction on them,” Gorman said.

In acknowledging the potentially disproportionate impact of space junk on certain global regions, and the age-old political question that’s plagued the inner workings of intergovernmental bodies like the United Nations, leaders now have to ask if more of the responsibility should be placed upon the leading space-exploring countries, and how those disparities can be prevented from causing even more political (and resource-centered) conflict, especially as global climate concerns grow.

The new study concludes bluntly — there is no longer an excuse to keep these events vague in terms of their regulatory implications, other than for avoiding responsibility and prioritizing profit. “We have the technology to build controlled re-entry into the missions; space operators are just choosing not to do it,” Gorman said.

It’s in the best interest of everyone, including billion-dollar companies like SpaceX, to begin monitoring, recycling, and decreasing the risk of falling space debris — if they can’t be convinced that it’s better for both people, the planet, and their business — it’s at least the much better PR option.