NASA’s megarocket is back in its giant garage after completing a mission-critical dress rehearsal at the launchpad for its first voyage to the moon.

Among the tests completed at Kennedy Space Center in Florida this June, engineers demonstrated the rocket, aka the Space Launch System, can gimbal like nobody’s business.

An engine’s gimbaling, or pivoting, is necessary to ensure a spaceflight hits its proper trajectory. As the engine nozzle moves from side to side, the direction of the thrust — or oomph the engine provides for the rocket — changes relative to the center of gravity of the vehicle.

The megarocket is much more powerful than its predecessor, the Saturn V rocket, using 8.8 million pounds of thrust during liftoff and ascent, 15 percent more than Saturn V offered.

The four main rocket engines, taken from the Space Shuttle, will be fueled with 700,000 gallons of super cold propellant and produce a thrust powerful enough to keep eight Boeing 747s aloft.

NASA souped up the old 1980s parts, which ran 135 shuttle missions, for deep space. Engineers had to adapt them to the flow rate of cryogenic fuel and install new pipe connections. 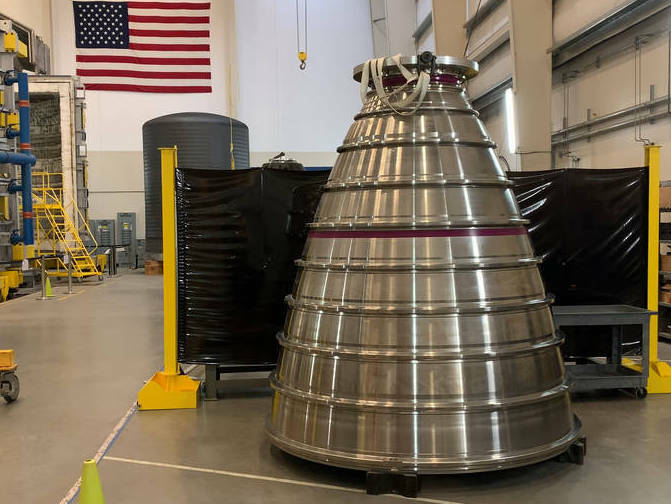 NASA will launch the rocket as part of Artemis I, the first U.S. lunar mission since the Apollo era. The enormous 5.75 million-pound rocket will eventually send the new Orion spacecraft around the moon — without astronauts the first time — then splash down in the Pacific Ocean. One major purpose for the flight is to show that the capsule can safely reenter Earth’s atmosphere and hit its target in the water before it carries human passengers.

It’s been a long time since the U.S. space agency had a rocket of this magnitude, capable of sending heavy loads of cargo and people far from Earth. Not only is it built to travel to the moon, it’s expected to one day put the first astronauts on Mars.

Having aced her test, the megarocket is one step closer to the moon. Watch her wobble some more in the video above.

Technicians are now working on two seals associated with hardware that leaked liquid hydrogen during the rehearsal that ended June 20, along with some final planned preparations for launch.